I wanted to write this post for some time, but only now having seen the pretty impressive improvements on the GNOME Maps application I was reminded of the topic and took the time to finally write it down.

The issue addressed in this topic is how to plan a "nice" route when travelling larger distances, say more than 40 kilometers, on a road bike. As this type of vehicle does not like going over gravel or other rough surfaces, a "nice" route should have paved surfaces all the time. This requirement is somewhat easy to fulfil when using routes calculated for cars. Unfortunately this guarantees a journey in heavy traffic let alone sections on "Bundesstrassen" where the speed difference to the passing cars is that high that driving a bicycle becomes very uneasy, let alone enjoyable.

When I started using the eTrex for my cycling trips, I could not find any freely usable trip planner suitable for that reason. I did use OpenRouteService quite a lot but usually I helped it by placing a lot of way points effectively forcing it to pick the route that I had preselected already

In the past I usually circumvented that by using routes that other people have published for road bikes on platforms like gpstour.info or GPSies, but once I have seen the nice possibilities of the outdooractive trip planning, I wondered if it wasn't possible in the meantime to use a map service to come up with suitable routes.

Although outdooractive explicitly supports planning for road bikes, my first attempt shown in the figure above (with only one immediate way point for 60km) immediately yielded a section on a Bundesstrasse where I knew there were better alternatives. (All thumbnails can be opened for the full size picture).

As I learned about GraphHopper Maps through the controversy that GNOME Maps for a short time lost its map source, I wondered how GraphHopper would solve the same problem. And indeed the route looks much better: 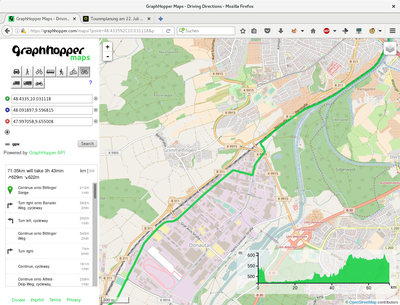 That route was really a pleasure to ride and so I planned to write up that little piece sometime afterwards. Doing so now - some considerable time later - I really wondered if OpenRouteService is still alive and what it would do with my trip planning. Certainly I was very positively surprised to see the result: 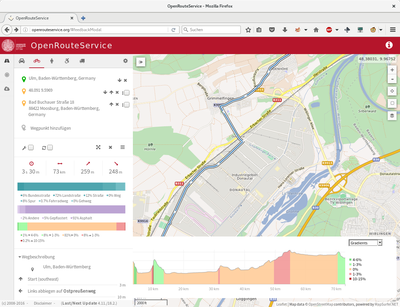 The route looks even more scenic than the GraphHopper one, but as can be seen in the height profile (the hunch on the left hand side), passing through Grimmelfingen adds a few height meters to the trip that are not strictly necessary.

In summary I really appreciate the quality of the GraphHopper route. The web application is also very responsive and comparable to Google Maps in ease of use, so this is my current favourite. I'd be interested in other peoples experiences with such trip planners though.