Mozilla published its intent to remove RSS support in Firefox 63 or Firefox 64 . The reasoning is that the feature is not widely used and so the code has become a large burden on the rest of the code base. Without knowing the Firefox code base, this explanation makes a lot of sense.

A comment on the previous post An Increasingly User-Hostile Web got me started using RSS only a few months ago, but because this workflow naturally supports reading news from different devices, it has become part of my daily workflow. All that was needed was the installation of Nextcloud News App on my existing server.

For the app to work correctly, the Nextcloud installation needs to be able to periodically check for new updates, so configuring Cron or Webcron is required. As my hoster allows cron-jobs, this is the option I chose.

As can be seen from the screen-shot, the interface is very lean but intuitive. I would like to see some improvements for editing the subscription lists, but all in all the app does its job well. 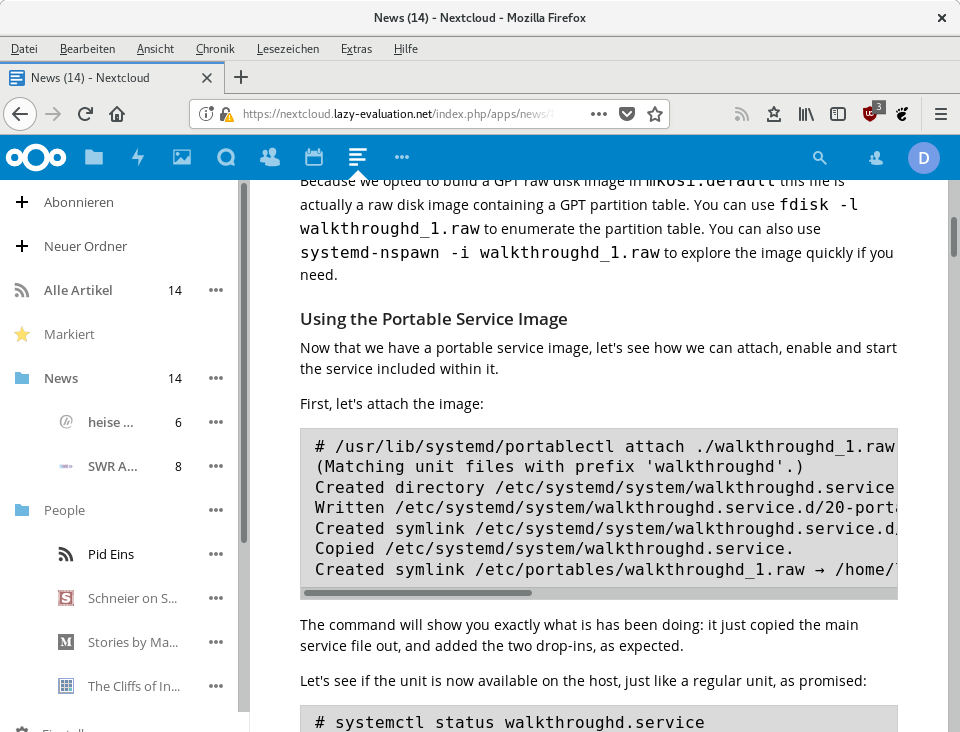 As the server keeps state of what I already saw, it is absolutely transparent to access the App from multiple devices without missing a single item. In combination with the Firefox feature to send a tab from an Android device to another computer, this is also perfect for discovering interesting content even "on the road" and sending the tab to a workplace better suited for subsequent longer reads.

So with this setup RSS has become a very convenient tool for me to stay up to date with regard to different sources. It takes some time to discover the interesting RSS feeds, but they are definitely available, as they are implemented by the underlying infrastructure anyway. Just like Nikola implements the RSS feed for this blog without additional effort.

Although Firefox now looses its own tools, it supports my setup nicely as clicking on RSS feeds automatically opens the "add subscription" page of the News App on the Nextcloud server without manual intervention. Nice!